Two Koreas’ Simultaneous Joining of the U.N. in 1991 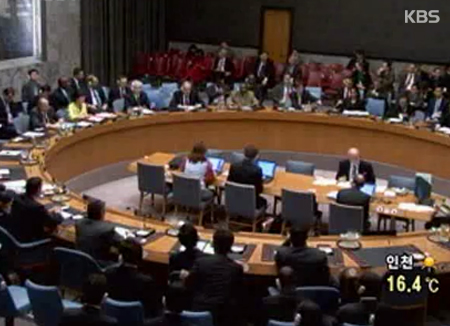 U.N. Secretary-General Antonio Guterres expressed his high expectations for the 2018 PyeongChang Winter Olympic Games during his visit to South Korea to attend the opening ceremony of the event in February. Just as the U.N. chief wished, this year’s Olympics contributed to opening the channels of inter-Korean dialogue, which led to the agreement on a summit between South and North Korea and a North Korea-U.S. summit as well. With the purpose of preventing war and maintaining peace, the United Nations has paid much attention to how to settle disputes over Korean Peninsula issues. It was 27 years ago when South and North Korea simultaneously joined the U.N. On September 17, 1991, the national flags of South and North Korea were raised side by side in front of the U.N. headquarters in New York. Former South Korean ambassador to the U.N. Oh Joon watched the historic scene. The young diplomat in his 30s was filled with emotion.

13 years after I entered the Foreign Ministry, South and North Korea joined the U.N. together. That was our long-cherished diplomatic goal. On the significant occasion, I happened to be there in New York. It was very warm, as it was an Indian summer day in September. I clearly remember that the national flags of South and North Korea were hoisted at the same time, side by side. They were among the seven flags that were raised that day. I had many thoughts going on in my mind. Since I was young at that time, I hoped that the two different flags would merge into one before I finish my diplomatic career.

Mr. Oh remembers the two Koreas’ simultaneous joining of the U.N. as the most impressive moment in his 38-year diplomatic career. It was indeed a monumental event. The 3rd U.N. General Assembly in 1948 recognized the Republic of Korea as the sole legitimate government on the Korean Peninsula. Since January 1949, South Korea applied for U.N. membership many times but its applications were rejected each time due to a veto by the Soviet Union, one of the permanent members of the U.N. Security Council. North Korea also sought to attain U.N. membership in February 1949. But the Security Council refused even to refer the application of North Korea to its membership committee for preliminary consideration because very few countries, except the Soviet Union, supported the move. Despite long years of efforts, both Koreas failed to join the U.N. But how come they were simultaneously admitted to the U.N. in 1991?

As the background for the two Koreas’ admission to the U.N., Mr. Oh cites the South Korean government’s “northern policy.” The government announced the “July 7 declaration” in 1988 and started to implement its northern policy of improving relations with North Korea and opening diplomatic doors to the Communist bloc countries. As a result, South Korea established diplomatic ties with Hungary on February 1, 1989, making its first establishment of diplomatic relations with a communist state. The following year, South Korea normalized relations with the Soviet Union. After that, the Soviet Union supported South Korea’s move to gain membership to the U.N. As a result of the Seoul government’s northern policy, China, too, decided not to exercise its right to veto South Korea’s U.N. membership. Influenced by the diplomatic developments, North Korea announced in May 1991 that it would withdraw from its previous position to support a single Korean seat on the U.N. Two months later, the North submitted its application for U.N. membership. South Korea followed suit in August. In September, the 46th U.N. General Assembly unanimously admitted both Koreas. That day, North and South Korea became the 160th and the 161st U.N. member state, respectively, in the order of application. It was a significant day, when the two Koreas recognized their differences and paved the way for bilateral cooperation. Here again is Mr. Oh.

Both South and North Korea have joined the U.N., which is the only international organization that includes all countries on the globe and deals with all international issues. That means the two Koreas will now recognize each other as a nation. Although the Constitutions on the two sides do not accept the other side as an official state, they, in effect, recognize each other on the international stage at least. That doesn’t mean South Korea will give up unification. Rather, the South and the North are committed to dialogue and cooperation in the belief that they will be able to achieve unification one day, even though they may recognize each other as a different country. It is also significant that the two sides have acknowledged the reality that they would compete but also cooperate when necessary in the international arena.

The simultaneous joining of the U.N. by the two Koreas helped bring an end to the row over who is the only legitimate government on the Korean Peninsula, thereby ending the wasteful confrontation and arranging an institutional framework for lasting peace. It also laid the groundwork for the future unification of Korea, as Seoul and Pyongyang signed the inter-Korean basic agreement on December 13, 1991, to present a vision for peaceful unification. Unfortunately, peace didn’t last long, as North Korea withdrew from the Nuclear Non-proliferation Treaty in 1993, two years after it became the U.N. member, to trigger the first North Korean nuclear crisis. Afterwards, North Korea has continued with its nuclear threats, which have made the nation suffer from U.N. sanctions. Mr. Oh expects that the upcoming inter-Korean summit will serve as a fresh turning point.

I think the nuclear issue has been the biggest burden on inter-Korean relations for the last 12 years since North Korea’s first nuclear test in 2006. Since the North started developing nuclear weapons, the South and the North have found it increasingly difficult to push for dialogue and cooperation, which is essential for unification. The U.N. Security Council has adopted eight resolutions calling for sanctions against North Korea. With North Korea under ever-intensifying sanctions, it is impossible for South Korea to carry out any cooperation projects with the North. To return to the phase of dialogue and cooperation, the nuclear issue should be resolved first and the sanctions should also be eased. Pyongyang must clearly show its commitment to denuclearization at the inter-Korean summit and the North Korea-U.S. summit so involved countries can find a clue to solve the nuclear problem and sanctions on the North will be eased to some degree. I’m looking forward to these positive developments.

Separate governments were established in Seoul and Pyongyang in 1948, under the supervision of the U.N. Forty-three years later, in 1991, South and North Korea were officially recognized as a member of the international community and dreamed of peaceful unification. Here’s hoping that the two sides recall the dramatic moment of joining the U.N. together 27 years ago and use the inter-Korean summit to be held at the truce village of Panmunjom on Friday as a guide for the declaration of an end to the Korean War and the signing of a peace treaty.
Share
Print
List