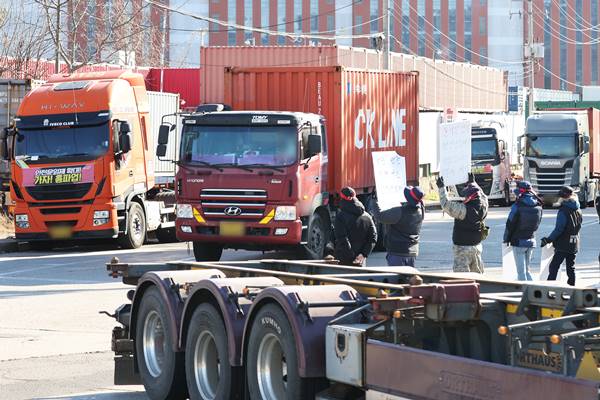 The government has filed a police complaint against a striking cement trucker who failed to comply with the return-to-work order and also requested administrative measures by relevant local authorities.

The transport ministry said on Wednesday that it surveyed 19 transport companies and 516 truck owners who received the order and found that one individual did not comply without a justifiable reason. The ministry said that it therefore filed the complaint and administrative request.

The latest action marks the first government sanction related to noncompliance with the back-to-work order.

The first act of noncompliance will result in suspended business for 30 days while failure to comply for the second time could lead to cancellation of licences in addition to jail time or fines.

The punitive measures, however, will not take immediate effect as local governments will make the final decision after listening to what the relevant parties have to say.

According to the transport ministry, 16 trucking firms and 475 truck owners have returned to work while 40 truckers expressed intent to do so but are unable to resume operations immediately due to COVID-19 infections or other illnesses.

Meanwhile, the government estimates that some 47-hundred members of the Cargo Truckers Solidarity union will hold rallies or be on standby for gatherings at 170 locations nationwide on Wednesday. Around 44-hundred members took part in similar rallies on Tuesday.
Share
Print
List