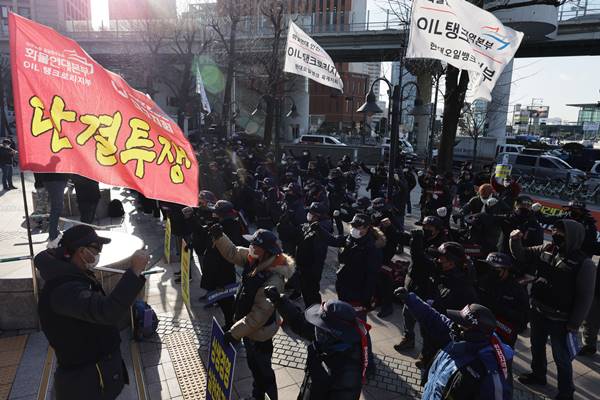 Anchor: As the unionized truckers' strike entered Day 14 on Wednesday, unions representing the nation's concrete truck and pump operators and parcel delivery workers have pledged to launch their own collective action in support of the truckers.
Choi You Sun reports.

Report: The Korean Confederation of Trade Unions(KCTU) estimated that some 20-thousand members gathered at 15 locations nationwide on Tuesday to stage rallies in support of a general strike by unionized truckers. Police, however, placed the combined total at just over five-thousand.

As the strike entered its 14th day on Wednesday, some two-thousand-500 unionized construction workers, mostly ready-mix concrete truck drivers and pump operators, in the South Gyeongsang region announced that they will launch a walkout from Thursday.

This comes as unionized construction workers in the Busan, Ulsan and South Gyeongsang regions had already begun their walkout on Monday. The simultaneous group actions will likely hamper construction at apartment and infrastructure sites in these areas.

The KCTU and the Korean Public Service and Transport Workers' Union, meanwhile, sent a letter urging the International Labour Organization(ILO) to further intervene in Seoul's return-to-work order, defining it as a form of oppression.

This follows the ILO secretariat's earlier request for the South Korean government to comment on the ongoing labor situation.

While the Cargo Truckers Solidarity union has requested an administrative court to cancel the government order, the National Human Rights Commission rejected the union's petition for the watchdog to advise the government to scrap the directive.

Following an enforcement of the order, the government said 492 truckers in the cement industry returned to work as of Tuesday.