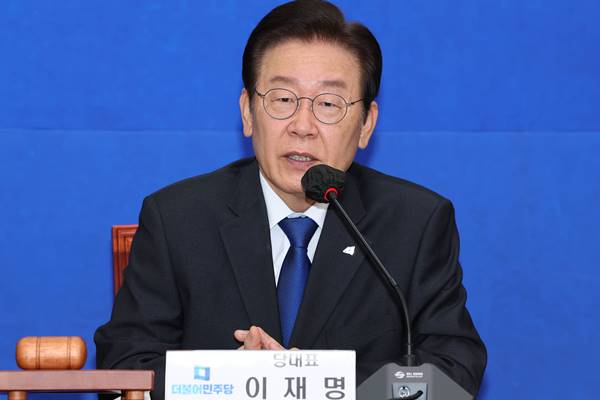 Main opposition Democratic Party(DP) leader Lee Jae-myung, who is reportedly the target of the prosecution's expanding corruption probes, has accused the state agency of pursuing political retaliation by abusing its power to manipulate the investigations.

At a party Supreme Council meeting on Wednesday, Lee alleged that the prosecution likely coached Nam Wook, a lawyer embroiled in the Daejang-dong land development scandal, in his recent accusations made against the DP chief.

During an ongoing trial, Nam recently claimed that he handed over at least 400 million won to Lee's camp when the party chief sought reelection for Seongnam city mayor in 2014.

The DP leader also accused the Yoon Suk Yeol administration of destroying democracy through the abuse of power and a "reign of terror," referring to recent regulatory revisions expanding the scope of the state spy agency's background check on high-ranking officials.
Share
Print
List