Hyundai Motor to Invest Additional $5 Bln in US 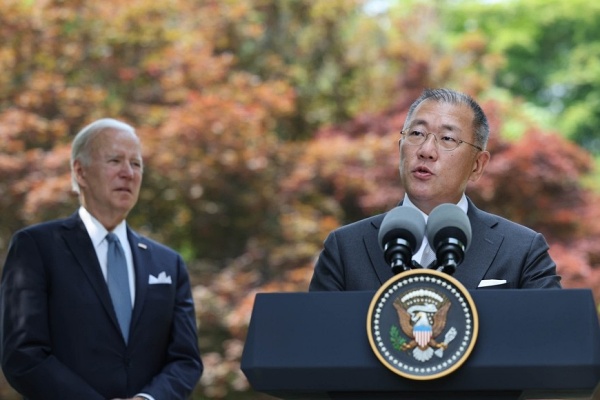 Hyundai Motor Group Chairperson Chung Eui-sun announced on Sunday that his group will invest an additional five billion dollars in the United States by 2025 for robotics and autonomous driving software development.

Chung made the announcement after his meeting with U.S. President Joe Biden, who is visiting South Korea for a three-day trip.

The two held the meeting for 15 minutes from around 11 a.m. at a hotel in Seoul where Biden is staying.

After the meeting, Biden said he was pleased that Hyundai announced an investment plan to build a new plant for electric vehicles (EV) in the U.S. state of Georgia, adding the investment is expected to create eight-thousand jobs.

On Saturday, Hyundai said that it would invest six-point-tree trillion won or about five-point-five billion dollars, to build its first dedicated EV plant in Bryan County, Georgia, with an aim to begin commercial production in the first half of 2025.