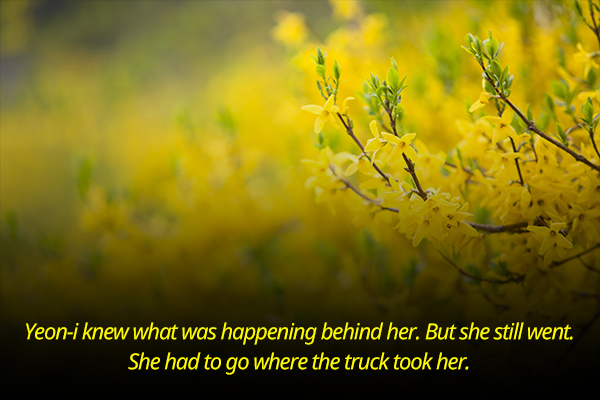 “I was unfortunate enough to lose my wife last year. I’ve been living as a widower since then, but I don’t have any children and both my parents are dead. Since it will be just the two us, there won’t be much work to do. But I wonder if you would mind the fact that I’m much older than you.”

The man gently took Yeon-i’s hand as he finished the sentence. She could only feel her heart race, unable to think of nothing else.

After that encounter, the man came to Yeon-i’s house frequently on his truck. Sometimes, he even stayed the night in Yeon-i’s room.

Three months since then, she couldn’t deny that a life was growing inside her womb.

One day when yellow forsythias blossomed behind the stone walls, Dol-i was reciting a few things he picked up while Jun-i was studying.

“The thirtieth day, the icicles, the sparkling icicles.”

He was pretending to read a book out loud when he ran across Gu-gil, another young boy from the neighborhood.

“Hey, I heard your mom is getting married.”

“Yeah, my mom is getting married.”

“Are you going with her?”

“Yeah, I’m going with her. And so will my grandma.”

Dol-i twisted his lips before pretending to read a book again and walking over to the road by himself.

If a man loved a woman enough to marry her, he should also be willing to take care of her son from the previous marriage. Even I was surprised at the scene where he said they should bring the boy to live with them when he is older. So, imagine how disappointed Yeon-i must have been. I wondered why the author put Yeon-in in such a dismal situation. During the Japanese colonial era or immediately after the liberation, it wasn’t easily accepted for women to remarry and make a new life for herself. It was an unreasonable social restriction. Yeon-i demonstrated how much pain and hardship Korean women had to suffer even after the country was liberated.

In the middle of the day when yellow forsythias blossomed behind the stone wall, a truck loaded with lumber stopped in front of Dol-i’s house. The man left the truck, carrying an old bag, and entered the house. Before long, he came out with Yeon-i, her eyes brimming with tears, walking ahead of him.

Before getting on the truck, she looked for her son.

Her voice choked as she called out his name, but the boy didn’t show up.

Where could he be? “If you stay with Grandma, I will buy some nice clothes and come for you,” said Yeon-i while holding back the tears.

Just when the truck was about to leave, Dol-i, who hadn’t answered Yeon-i’s call, was found to have smuggled himself into the truck, secretly tucked among the belongings piled on the truck bed. He was discovered by the man’s assistant and dragged down from the truck.

Dol-i desperately chased after the truck, but the distance simply grew farther and farther.

Yeon-i knew what was happening behind her. But she still went. She had to go where the truck took her.