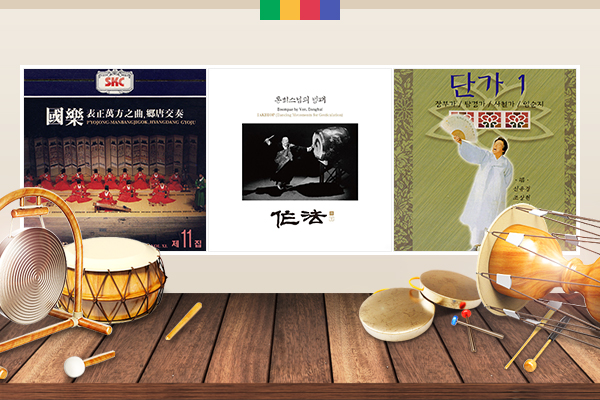 Traditional Korean music is divided largely into jeongak, or formal music, and folk music. Folk music obviously was enjoyed by common people while jeongak by the educated class. Compared to folk music, jeongak is slower and not much varied in rhythm and follows a rather rigidly fixed form. A large part of jeongak is comprised of a piece entitled “Yeongsanhoisang영산회상,” a collection of nine smaller pieces played in several different variations. For instance, when “Yeongsanhoisang” is performed by a small chamber orchestra that accentuates the sound of string instruments such as gayageum and geomungo, it is called “String Yeongsanhoisang.” Other variations were played at court celebrations as well, such as “Yuchosinjigok유초신지곡” or “Pyojeongmanbangjigok표정만방지곡.” The former is “Yeongsanhoisang” performed with a larger ensemble formation while the latter is played with only wind instruments without gayageum or geomungo. The difference is not just the type of musical instruments included or excluded, but also the composition and use of melodies which depend on which instruments are used. The first piece for today is the “Seryeongsan세령산” movement from “Pyojeongmanbangjigok” performed by the Court Music Orchestra of the National Gugak Center.

While the string version of “Yeongsanhoisang” is for just listening, “Pyojeongmanbangjigok” is played just when food is served at a party or as background music for a dance performance. The term “Yeongsanhoisang” originated from Buddhism. Yeongsan refers to Yeongchuksan영축산 or Yeongchwisan영취산 mountains in India where Buddha reportedly preached to his disciples and several Buddhist saints invisible to normal people. This gathering was called Yeongsanhoisang, meaning a meeting at Yeongsan Mountain. There was a Buddhist funereal rite called Yeongsanjae영산재, inscribed as a UNESCO Intangible Cultural Heritage of Humanity in 2009. This ritual prays for the dead to cross over to paradise. Buddhists believe that it takes 49 days for a dead person to be reincarnated. A 49-day prayer service is held to wish for a loved one to be reborn in a sound body. The 49-day service is carried out in various formats, including Yeongsanjae, the grandest version of the prayer service. A large painting of Buddha’s gathering at Yeongsan is hung on the wall and Buddhist monks sing beompae범패or Buddhist hymns and perform Buddhist dance, jakbeopmu작법무 and follow assorted procedures to lead the dead to Heaven. Now Monk Donghee will sing “Jiokge지옥게” or “Hell Gatha,” one of the beompae songs sung during the Yeongsanjae service. The song prays for the gates to Hell be opened so that the souls can be released from their torture.

Another music genre in which the term “yeongsan” was used is danga단가. Danga refers to a short song sung by pansori singers before they begin a pansori performance to sort of clear up their throats or warm up their vocal cords. Unlike pansori songs that express various emotions by using different beats, danga pieces are all in jungmori, something akin to a medium tempo that is not too slow or too fast. Danga songs are sung placidly, not in an overly emotional manner, about great sceneries or historical heroes. It is unknown why danga songs are also called yeongsan, but there is a poem entitled “Yeongsan Seongseon영산성선” from the 1800s that was supposedly written after hearing a danga piece. Here the term “seongseon” means a preceding song, which indicates that it precedes a pansori performance. Nowadays people like to hear more about our everyday lives rather than about the extraordinary lives of heroes. So here’s master singer Jo Sang-hyun singing “Sacheolga사철가,” which means the song of the four seasons.

Song of the Four Seasons/ Sung by Jo Sang-hyun