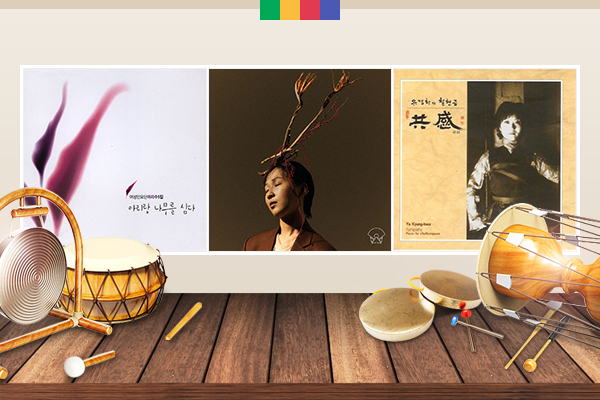 In the old days when people didn’t have much entertainment, shamanistic rituals called ghut굿 were a good source of food and fun. Of course, being a sort of religious ceremony, shamans would pray to the gods to make a wish or send off dead people’s spirits to the netherworld. But the process required appeasing the gods with good food and wine and enjoyable music and dance. The shaman priestesses and musicians tried their best to offer best music and dance to the gods, the effort with which they came to be admired artists. Their skills and artistry survived much turmoil to be incorporated into various disciplines of today’s traditional arts. Today’s first piece is Jeju folksong entitled “Seowujesori서우제소리,” a song people used to sing whenever they worked or partied. In the beginning part of the song, wine is offered to the gods and it is followed by the shaman priestess, ceremony participants and onlookers dancing to the song. Today’s version is sung by fusion folksong ensemble Arisu.

There are several folksongs that originated from ghut music, such as Gyeonggi-do folksong “Changbutaryeong창부타령” or “Seongjupuri성주풀이” from the southern region. “Daegamnori대감놀이” is a scene from a shaman ritual rendered into a stage play. “Babaengi ghut배뱅이굿” from the western region is a satirical song that condemned some ghut ceremonies that scammed people out of money by making fun of people who hold these rituals. Salpuri 살풀이dance, a Korean shamanic dance now designated as one of Korea’s intangible cultural assets, was originally performed to ward off evil spirits. When ghut ceremonies were banned under the Japanese colonial rule, shaman priestesses shaped the ceremonial dance into an art form. Ghut ceremonies were held for individuals when there was an occasion to celebrate or mourn or to pray for a dead spirit to find its way to heaven. Villages or larger groups performed the ceremonies to wish for abundant harvest or safe fishing. Each region had a different set of procedures, songs, and dances. Shaman music provides today’s artists with a rich source of musical inspiration. Next up is fusion band Chudahye Chagis singing “Eheori Ssunggeoya,” a modern arrangement of west coast ghut music “Ssonggeotaryeong쏭거타령” that wished for fishermen’s safety and big catches.

Coming up next is “Hwadu화두,” a rearrangement of shamanic music from the east coast region. Master Kim Myeong-dae김명대 leading the vocal part in “Hwadu” is from a family of shamans and has been around ghut since he was young. There is a ghut entitled Sejonghut세존굿 among the many ghut ceremonies originating from the eastern region. Sejon originally means Buddha but the term means something else in east coast shamanism. Sejon refers to a completely different being in the appearance of a Buddhist monk. That being marries a woman whose sons later become Jeseoksin제석신, the god in charge of people’s lifespan and fortune. The scene in which the godly being wearing Buddhist beads courts the human female is described in “Hwadu.” This music piece sounds more mythical with the addition of cheolhyeongeum철현금, a metal-stringed instrument. Cheolhyeongeum is not an ancient instrument but a new one invented in the 1940s when the playing method for the geomungo was applied to the guitar. The prolonged metallic timber gives the shamanic invocation a more mysterious vibe. Let’s listen to Kim Myeong-dae singing “Hwadu” to the cheolhyeongeum accompaniment by Yu Kyung-hwa.