“An Empty Lot” by Park Hwa-young 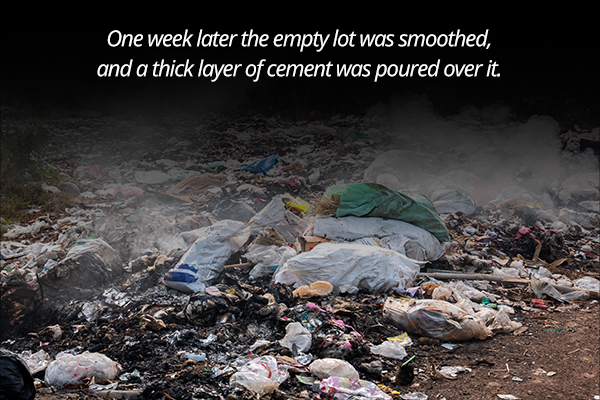 At the center of that highland area was the controversial empty lot. At first, five or six nearby homes were razed, leaving an empty lot. People assumed, not surprisingly, that a multiplex building or studio apartments would be soon built there.

But a month went by, and the lot still stood empty. People then began to pay attention to the lot.

Sometimes empty liquor bottles or cans of aerosol adhesive would be found there, prompting people to regard the empty space as the source and terminal of all crimes. As the middle-aged owner of Hanareum Mart said, it was an ominous sign, no, a sin to leave the lot abandoned in this city.

People didn’t come to the empty lot only to throw away trash. They came to burn, bury or scatter stuff at the lot. A woman with dark freckles under her eyes came to the empty lot often to burn something. She would put letters, postcards or sometimes a stuffed teddy bear in a drum can and lit them afire. A man who lives in a semi-basement room in the nearby row house came to the lot frequently in the early morning hours to bury something. He always carried a shovel and something about the size of a human body wrapped in black plastic.

The empty lot is a dump for life’s detriments, the remnants of people’s exhausting and joyless lives. But the lot is paved over and everything is forgotten. Roads, apartments, and stores will be built over the lot and people who occupy those places would live happily, while the city hides something grotesque. The author is saying that we may live with depression and exhaustion, but malls, apartments and paved roads may be hiding all that.

It was around that time that a construction sign was erected at the empty lot. Villagers were relieved that the problems plaguing them were finally resolved. Fences soon went up and the cats were driven away. There was only silence at the lot where the sounds of chilling winds and mewling cats had once filled the night. Cats were dispersed over the neighborhood but one by one they showed up dead. The residents were convinced that someone was poisoning the cats.

The day after the cats’ disappearance, a woman jumped off the multiplex building near the empty lot. Her high-heeled shoes and a letter were found on the rooftop. In the letter, she wrote that she could still see the cats even though there was no sound.

One week later the empty lot was smoothed, and a thick layer of cement was poured over it.

Debuted with short story “An Empty Lot” in 2009