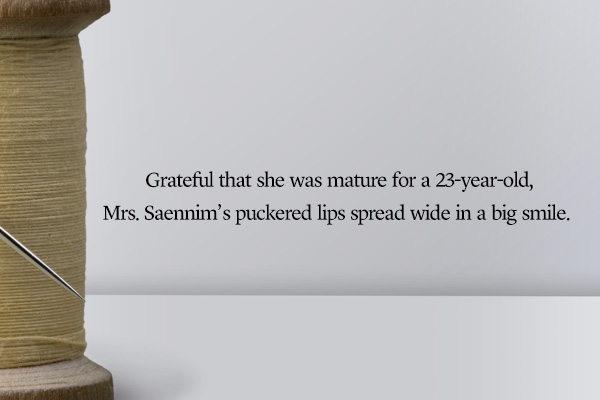 Kim Eung-gyo came to work as a school clerk, but in all honesty, he was simply a servant who did odd jobs around the school, like sweeping the school yard, opening and closing the school gate or offices, or running errands for teachers and administrators. Once the new dormitory was built, he had his wife work as a maid for dormitory residents and both of them ended up making money.

So, they were respected as Mister and Missus Saennim by the dorm residents, but he was always just “Eung-gyo” at the school.

From the main bedroom came the sound of a sewing machine.

“Gosh, that’s the only thing she does all day.” (Mrs. Saennim)

Eun-ae’s grandmother mumbled while sitting down in the sunlight with a box. The box was filled with colored papers – blue, yellow, white, purple.

Fabrics waiting to be transformed by her daughter’s sewing skills were wrapped in those colorful papers, silky and shiny. The papers were once destined to be discarded as some of them came torn and rumpled, but now they are smoothed out by the old woman’s hands. She would hand them over to her niece-in-law who sold rice cakes and get a pack of cigarettes in return every time.

The most noticeable attitude of Eun-ae was the high value she placed on women’s labor. Back then, cooking or sewing was something that women did naturally or to make a living. But Eun-ae believed that women’s labor was something valuable that could help other people and wanted to become an energetic woman who uses her abilities to pioneer her life rather than become an obedient wife or mother, the idea of a good woman in the conventional patriarchal framework. Her resolve finally moved her grandmother’s mind. Park Hwa-sung was in her sixties when this story was published in 1965. She was already old by then, but she wanted young women to escape from the society’s confines and regulations imposed on them and live more independent lives.

“I grew old cooking for others while your mother grew old sewing for other women. Do you plan to grow old making dresses?” (Mrs. Saennim)

“What’s wrong with it? People get old anyway. Aren’t you and Mom proud of doing something for other people? Take me for instance. Wouldn’t it be great to study design and make something good and big out of something bad and small? Oh, Grandma, how about I make a night gown for you?”

“You crazy girl! Why would an old woman like me wear a western dress? Stop talking nonsense.”

“No, not a western dress. I meant something like pajamas. You’ll look great in it.”

Eun-ae skipped her way to the main bedroom. Grateful that she was mature for a 23-year-old, Mrs. Saennim’s puckered lips spread wide in a big smile.