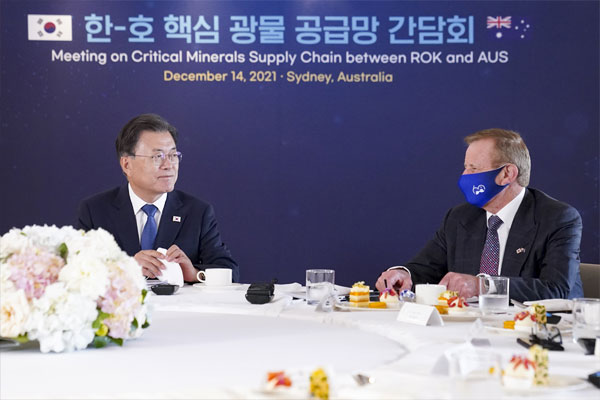 South Korea and Australia marked the 60th anniversary of diplomatic relations this year. During South Korean President Moon Jae-in’s visit to Australia last week, the two nations agreed to upgrade their ties to a comprehensive strategic partnership to strengthen cooperation in various areas.

The agreement between South Korea and Australia on strengthening cooperation in resources and energy is definitely worth mentioning. Australia is rich in energy and mineral resources. For South Korea, it is highly important to cooperate with resource-rich countries. It is all the more so at a time when the pandemic disrupted global supply chains, while China is showing signs of weaponizing its resources. For South Korea, the key part of the recent agreement with Australia is to secure the supply chain for critical minerals.

According to the International Energy Agency, demand for critical minerals essential for clean energy technologies may increase four times by 2040, compared to 2020, to meet the climate goal that was set by the Paris Agreement. The goal is to keep the increase in global average temperature well below 2 degrees Celsius. A sharp rise is anticipated for the energy sector’s overall needs for metallic minerals, in particular, such as lithium, graphite, cobalt and nickel.

South Korea is fostering electric vehicles and secondary batteries as future growth engines. It is important for the country to secure a stable supply of critical minerals. The Australian government is also nurturing the key mineral industry, as seen in its “Critical Minerals Strategy” in 2019 and “Modern Manufacturing Strategy” in 2020.

Against the backdrop, stronger cooperation between South Korea and Australia on the supply chain for raw materials and core minerals is a win-win strategy. The same is true of their hydrogen partnership.

Coal and natural gas are abundant in Australia. But the resources would be useless, if countries go carbon neutral. Australia is well aware of that. The country is therefore focusing on so-called blue hydrogen, which is derived from natural gas. In late 2019, Australia announced a goal of becoming the world’s largest hydrogen exporter by 2050. South Korea is also committed to establishing a hydrogen economy, in which the country sees the economic future. It’s worth noting that South Korea and Australia agreed to enhance cooperation in the field of the hydrogen economy.

On another upbeat note, South Korea secured a large defense deal with Australia to export its K9 self-propelled howitzer artillery guns. Under the deal, the Australian Army will introduce 30 K9 howitzers and 15 K10 ammunition resupply vehicles, with the weapons manufactured locally. The deal is worth 1 trillion won, the largest-ever export contract for the mobile artillery pieces. The defense contract makes South Korea the first Asian country to export major weapons system to Australia.

Australia is one of the members of the Five Eyes, which is an intelligence alliance consisting of the U.S. and its allies. Australia’s decision to import weapons from South Korea is significant because it means the former fully trusts the latter. If Australia imports and uses South Korea’s K9, the other members of the Five Eyes may also trust South Korea. That’s why the massive defense deal is drawing special attention.

According to the Stockholm International Peace Research Institute, the K9 howitzers accounted for 48 percent of the global self-propelled howitzer market from 2000 to 2017. K9’s popularity is attributable to its excellent operational capability. It can operate in a range of environments, from Korea’s mountainous terrain and vast plains to snowy fields, jungles and deserts. A single unit costs between 3.3 million US dollars and 4.2 million dollars, much cheaper than its German alternative priced at over 8 million dollars. It comes as no surprise that South Korean-made howitzers stay highly competitive.

On the occasion of the recent South Korea-Australia summit, South Korean companies are also eager to expand their business in Australia.

POSCO International has acquired an Australian natural gas company. South Korea’s power plant builder Doosan Heavy Industries and Construction has also signed a contract worth 93 million US dollars to build an energy storage system or ESS in Australia along with its U.S. subsidiary Doosan GridTech. I think it is effective for South Korean private firms to conduct their business in Australia, in line with the main policy direction set by the government.

Outside the economic realm, South Korea reaffirmed Australia’s unwavering support for its peace initiative on the Korean Peninsula. However, President Moon’s visit to Australia, which has been mired in conflict with China, could be interpreted as a sign that South Korea is moving a step closer to joining a U.S.-led alliance against China.

Relations between Australia and China have frozen quickly. Moreover, the U.S., Canada, the U.K. and Australia have declared a diplomatic boycott of the Beijing Winter Olympics to be held next February, escalating a bitter confrontation with China.

For South Korea, Australia is an important ally, while China is its biggest trading partner. On the diplomatic front, China’s role is crucial for South Korea’s push for the Korean Peninsula peace process and the declaration of an official end to the Korean War. Indeed, South Korea is locked in a diplomatic dilemma over how to strike a strategic balance between the U.S. and China.

South Korea has initiated steps to become a member of the Comprehensive and Progressive Agreement for Trans-Pacific Partnership or CPTPP. By maintaining good relations with Australia, South Korea could facilitate the process of joining the multilateral deal and solidify its position within it.

South Korea and Australia are long-time allies. During the Korean War, Australia dispatched its troops to help defend South Korea. The two nations have promoted friendship through brisk exchanges over the last six decades since they established diplomatic ties in 1961. Amid harsh global economic conditions, they have taken their relations to the next level. It is hoped that the two countries will sharpen their competitiveness further and weather the crisis together.

Headline News
National Pension Fund Predicted to Run Out by 2055
COVID-19 Vaccination for Children Aged 6 Months to 4 Yrs. to Begin Feb. 13
US Intelligence Official: Kim Jong-un Does Not See Need for 7th Nuclear Test Yet