Apposter, a Developer of Smartwatch Solutions 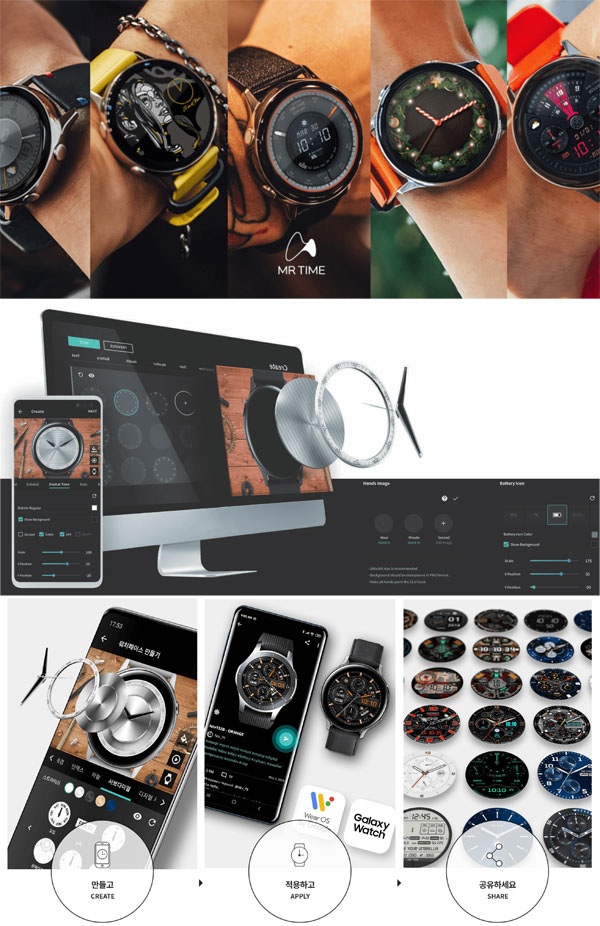 Now it’s time to take a look at a South Korean business bringing about changes in the global economy with some new ideas.

Apposter runs a watch face platform called “MR TIME,” which allows smartwatch users to design their own watch faces and share them with users all around the world. The company aims to combine design and technology in the best possible way to produce a great outcome.

While designing furniture and household goods in Italy, Kyung happened to show interest in applications. He started operating business related to app services in 2010 and experimented with a few more business items later.

At present, he is focusing on the ever-growing smartwatch market. According to market research firm IDC Korea, South Korea’s wearable device market last year grew 50.7 percent from a year earlier. Large companies are entering the global wearable device market, which has been dominated by two major players, namely, Apple and Samsung. Google and Meta are reportedly launching their own smartwatches next year.

Along with the wearable device market, the watch face market is also expanding. Apposter’s signature product “MR TIME” is a watch face platform.

A smartwatch is a small, wearable computer with a circular display. Those who wear a smartwatch may want to add a little of their own style to the display. But changing background images of a smartwatch is different from setting the wallpaper of a mobile phone. MR TIME helps smartwatch users design their own watch face and share them with others. With this free, DIY tool using a customization engine, people can create their own unique watch face in a minute or so. In other words, they can design their smartwatch faces easily and quickly.

A wristwatch is a device used to tell time. On top of that, it has been used as a fashion item. Therefore, design has been the determining factor for choosing a watch. But once people purchased a watch, they couldn’t change its design even though they no longer liked it. That’s not the case with smartwatches, in which software plays a key role. That means users may adorn their watches as they like. Demand for necessary tools began to rise. And that’s what MR TIME is for.

MR TIME allows users to create designs themselves, upload the designs and download others’ content as well, just like trading at the open market. Some 1.7 million watch faces have been designed by users worldwide.

In line with growing demand for watch straps that would match the diverse watch faces, Apposter started the watch strap business as well.

We also make watch straps that go well with smartwatch faces. Unlike ordinary watch straps, our smart straps are embedded with NFC tags. By tapping the tags, consumers can download a digital watch face that suits the strap they’ve purchased. That is to say, we put together online and offline techniques so consumers can use digitalized information through the NFC tags. It seems that services featuring a mix of online and offline are appealing greatly to consumers.

The MR TIME app has drawn an enthusiastic response. It has reached 1.2 million accumulated downloads, with 60-thousand to 70-thousand downloads per week. This service was selected for Google Featured, which refers to new apps recommended by the Google Play team, in some 200 countries including South Korea, of course, and those in North America and Europe.

Apposter has maintained steady growth. Its sales in the last two years grew more than 500 percent, compared to those recorded in the previous three years. It comes as little surprise that the company has won various awards and secured investment.

Last year, we received the minister’s award in the preliminary project of “Software High Growth Club” hosted by the Ministry of Science and ICT. This year, we were able to participate in the main project. We drew investment in a series A round in May this year, and we’ll push for a series B funding in the first half of next year. We obtained patents both in South Korea and the U.S. for our business model. We’ve applied for more patents in South Korea and other countries.

While our mobile platform is available around the world, our smart straps are only provided in the local market. We had planned to enter the U.S. and Japanese markets early last year, but things didn’t turn out well due to the COVID-19 pandemic. We believe the pandemic will abate to some extent next year, so we’re preparing to explore offline markets for our smart strap business.

The company has various other plans. It considers adding a marketplace to the MR TIME app, within which users can trade their content, and releasing a subscription model to provide a watch face and a strap in a bundle on a regular basis. It also plans on forming a partnership with watch companies in Switzerland so they can switch from analog to digital. There are so many things the company hopes to do and should do in this market with infinite growth potential.

In fact, smartwatches have yet to spread widely. But in the fledgling smartwatch market, South Korean users give instant feedback, which will greatly help us grow well and fulfill our dream of becoming a global firm.

At a time when a new paradigm is being established in the global watch industry, MR TIME hopes to serve as a global online watch community that showcases a distinct South Korean identity. We aim to show the power of Korean technology and content in the global smartwatch market. This is our goal and vision.

People the world over have already been enjoying watching South Korean movies and dramas through domestically-made smartphones and TVs. Through Apposter’s MR TIME, they will hopefully wear home-grown smartwatches, with the watch faces featuring K-content. MR TIME’s dream of becoming the world’s largest online watch community doesn’t seem to be an impossible goal.