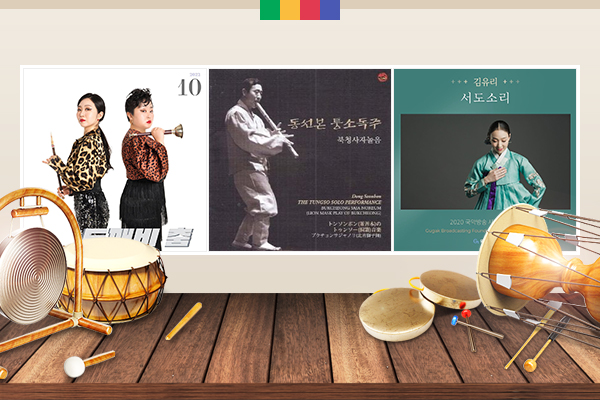 Dokkaebi is a mythical being familiar to Koreans as it appears in many Korean folklores. Dokkaebi is written in Chinese characters as one-legged ghost, dokgakgwi독각귀, with the letter “gwi” indicating a ghost. But dokkaebi is different from the spirit of a deceased person. It is neither a monster nor a fairy. It’s a being difficult for people of other cultures to understand what a dokkaebi really is. When a popular TV drama featuring dokkaebi and other supernatural beings was about to be aired overseas, there was a debate about how to translate dokkaebi. Instead of trying to translate or find a similar creature from other cultures, many Korean thought it better to just use the word ‘dokkaebi.’ It was believed that old things in nature or objects that people used for a long time, like a broom or a poker, turned into a dokkaebi. These creatures manifest themselves in the form of a light like will o’ the wisp or even a sound of something breaking. Most of the times they appear in the form of an weird-looking human. Dokkaebi is known to be very mischievous and like ssireum씨름, Korean traditional wrestling. There is a folktale about a man who met a dokkaebi in the middle of the night and had to wrestle it all night long before making his escape. There is even a tip for defeating a dokkaebi in wrestling – go for its left leg. Since the dokkaebi possess magical powers, Koreans in the old days often prayed to them for safety and riches. For instance, fishermen prayed for a big catch by offering buckwheat jelly, dokkaebi’s favorite food, and blacksmiths who work with fire regarded dokkaebi as their protector. Today’s first piece is “Dokkaebi Dance” performed by creative gugak duo MuRR.

People in the old days had other names for dokkaebi such as heosaengwon허생원 or Old Man Jinsaeng진생. Dokkaebis often meant big trouble but sometimes they did good. It was said that when you lend money to a dokkaebi, it would forget that it paid you back and keep giving you money it thought it owed you, eventually making you a wealthy man. There was even a saying that living on a dokkaebi lot where dokkaebis are believed to reside makes you a rich man. This being with unimaginable powers can be a disaster to some and a blessing for others, depending on how you act. There is another being like dokkaebi – the lion. Korea is not the lion’s natural habitat, but the animal is often featured in Korean mask dances. Stories of lion probably came from the West. During the Unified Silla period, scholar Choi Chi-won최치원 described the lion dance in his poem like thus.

It came from thousands of lis away, crossing the faraway deserts.

Its fur clothes are tattered, and it is covered in dirt.

It shakes its head and wags its tail to tame humanity.

Its exceptional gift far excels those of other creatures.

Lions are regarded as the king of all animals, but since ancient Koreans had never actually seen them, they were revered much like the mythical dragon or the phoenix. The lion dance was performed to chase away the evil spirits with the lion’s magical energy. Coming up next is “Lion Dance” performed by tungso퉁소 virtuoso Dong Seon-bon.

Lion Dance/ Performed by Dong Seon-bon and others

Ghost movies in the West largely involve people being possessed by evil spirits and hurting other people. But ghosts in Korean folklores are not evil, but rather sad and spiteful. Korean ghosts, in most cases, do not show up in order to hurt people, but to tell their unresolved issues or avenge those who had done them wrong. The downside of such encounters is that people are so frightened by these spirits that they die of shock, an outcome likely not intended by the ghosts. Korean shamans would perform ghut굿 ceremonies to appease not only the main spirits, but also minor ghosts who suffered unfair deaths. Our last song is entitled “Pagyeong파경,” a song to pacify and comfort assorted ghosts. It is sung by Kim Yu-ri.