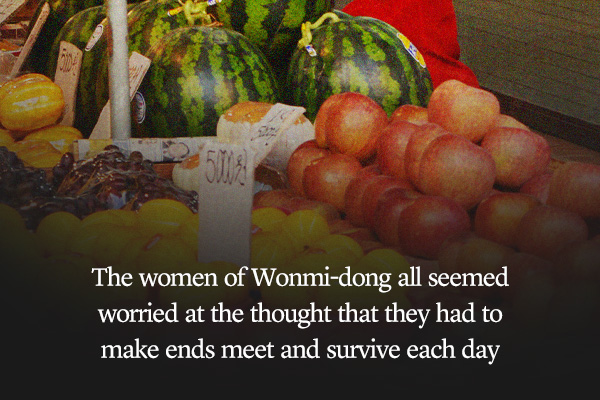 It was clear that the reason Brothers Supermarket suddenly began selling rice and coal and even set up a standing sign with “Rice, Coal” written in red paint was undeniably to counter Gimpo Supermarket’s opening.

While Gimpo Supermarket and Brothers Supermarket were fighting for their survival, a new store named Fresh Produce opened in a vacant building. The produce store was located right between the two supermarkets. It sold not only fruits and vegetables, but also other goods as well.

The title “One’s Daily Bread” encapsulates the story very well. Gimpo Supermarket and Brothers Supermarket continued to undersell each other until a new contender, Fresh Produce, appeared on the scene. Then the two stores formed a sort of cartel to drive away the newcomer. Some residents sided with Mr. Kim or Gyeong-ho’s father, but some residents felt sorry for the produce store. However, it was the residents who ended up enjoying the most benefit from the price war. This story was told comically, but the reality behind it was quite desperate and sad. Where did the owner of Fresh Produce go after being pushed out of Wonmi-dong? He probably went farther outside of the city. But we cannot place sole blame on the people of Wonmi-dong, because this place was their last resort as well. Everyone that appears in the story fought to survive each day, not to live in luxury.

“Because it’s hard to make a living.” (Young wife)

The young wife gave a wise answer to the dumb question of the butcher’s wife. Silence descended between them. The women of Wonmi-dong all seemed worried at the thought that they had to make ends meet and survive each day. Si-nae’s mother looked most dejected. As if signaled by the crying sound of the paper goods store’s youngest child, the women each went their way.

The place where they had left was filled with early spring sunshine.